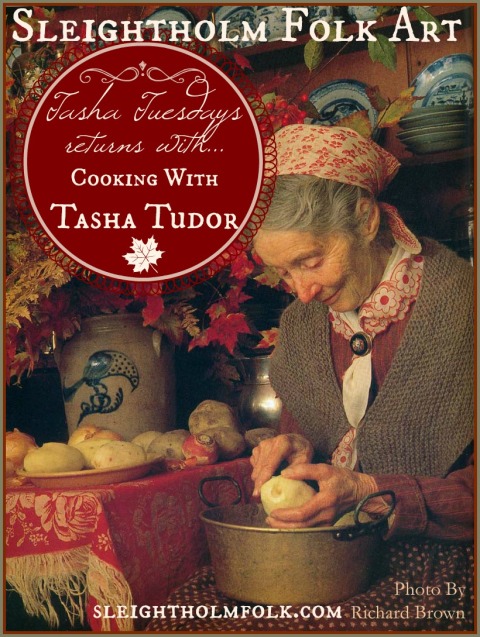 Good morning, friends! Here we are another Tuesday, and another Cooking with Tasha Tudor post! This past week was rather festive for me, as Sunday was my birthday! So, of course, I had birthday cake on the brain 🙂 Audrey and I got into the kitchen then to make, of course, “Becky’s Birthday Cake” as featured in the beautiful Tasha Tudor book, “Becky’s Birthday.” Here’s Audrey getting to work: 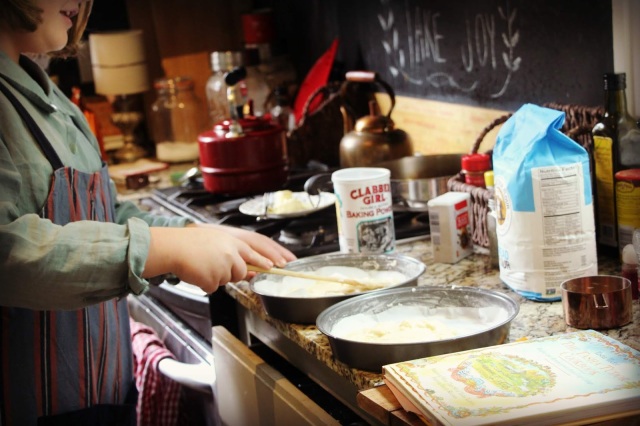 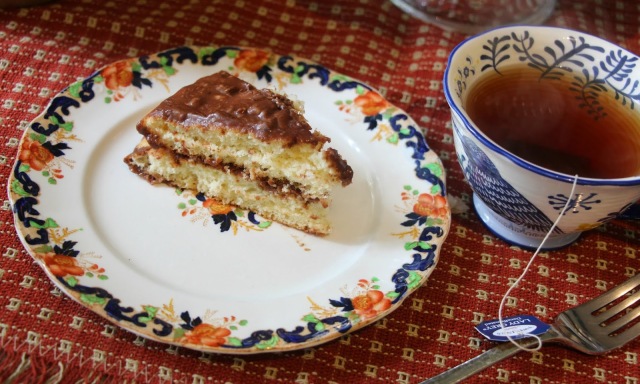 Now— let me preface this-— I had high hopes for this cake! But there was a ton going on this week in my life, and perhaps I was a little distracted. There were also some things in this deceptively simple recipe that I wasn’t used to doing for a cake (like whipped egg whites in the batter) and the frosting– which seemed so very simple on paper— appears to also be something that takes some practice to get right.

So the end result cake was…..well, when I saw it on the cake platter, I laughed until I had tears in my eyes. I’m not even gonna show it because I dont want it to be the representation of Tasha’s beloved cake on the internet, haha. Let’s just say…. “Nailed it!” 😉

BUT….it looked fine cut into pieces and the icing was tasty with a dash of coffee in it. If you make the cocoa icing I suggest adding the liquids verrrry slowly because it can go from thick to runny very quickly. Tread with caution!

I think I’ll try this recipe again another time to see if I can get it right. It is, evidently, not something to do when your brain is slightly addled from a week full of out of the ordinary things to do!

But in Becky’s Birthday, which is a lovely book, the cake turns out so lovely it gets floated down a creek in its own raft! By candlelight! I’m sure in Tasha’s hand, it was amazing! Let’s take a peek at the book…. 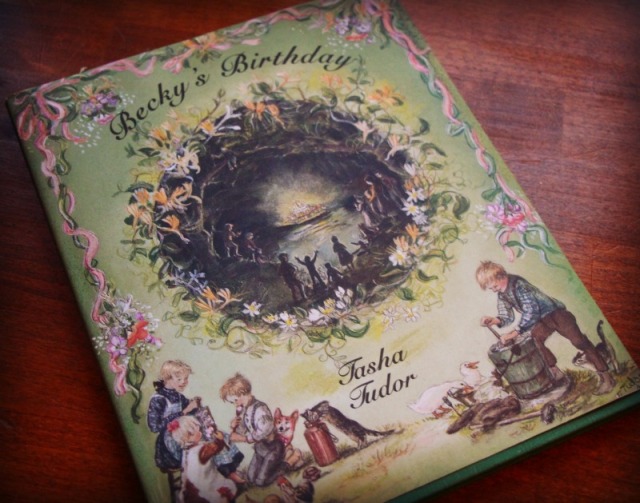 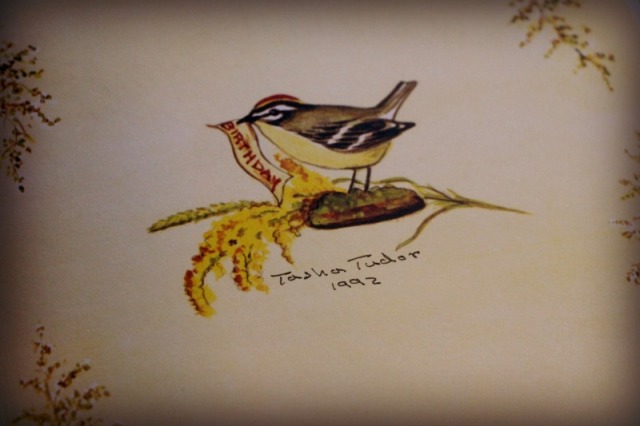 Several years ago I was contacted by a woman dissolving a relative’s estate, and she had several Tasha Tudor books she wanted to find good homes for— and some of them were signed. She let me know her list of books she had and kindly let me choose which I’d like to buy, and one of the books I purchased from her was this pristine copy of “Becky’s Birthday,” complete with Tasha Tudor’s autograph on the inside page! Its a treasure to me. Sweet too, because when she signed this book in 1992, I was 10 going on 11. Just about Becky’s age in the story! 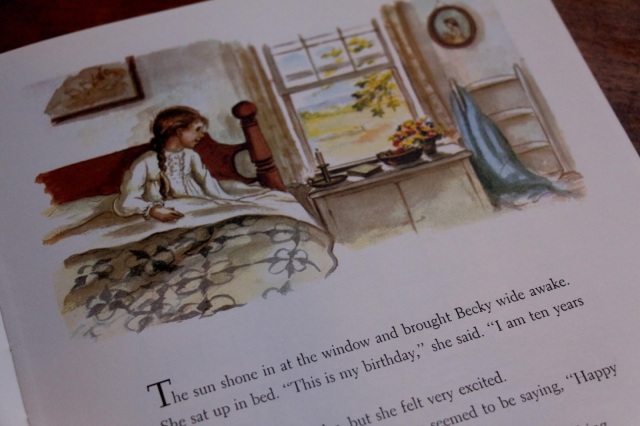 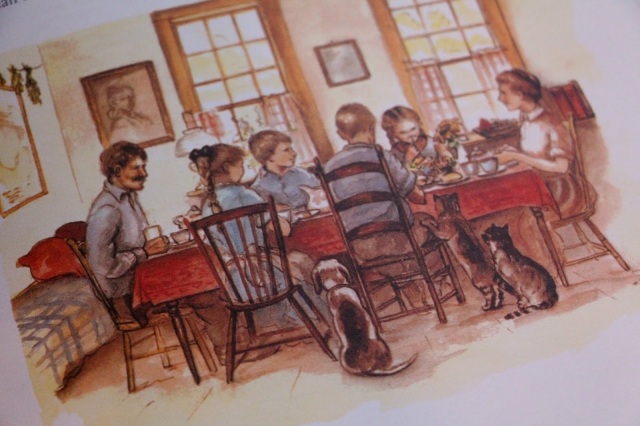 The illustrations in this book are gorgeous, and as a total Tasha Tudor nerd, there are some characters in the story that I can pick out from Tasha’s life. Look at that drawing of Becky’s father— it is basically a portrait of Tasha’s own father, Starling Burgess. Pop over here to see a photo and you’ll totally see it too.

I’m also wondering if the character of the mother in the story is a likeness of Tasha’s friend Nell Dorr, although on that one I’m not as sure about. All the children in the book, of course, bare a likeness to Tasha’s own children, which is sweet. I know for me, I tend to draw children and babies that look suspiciously like my own! 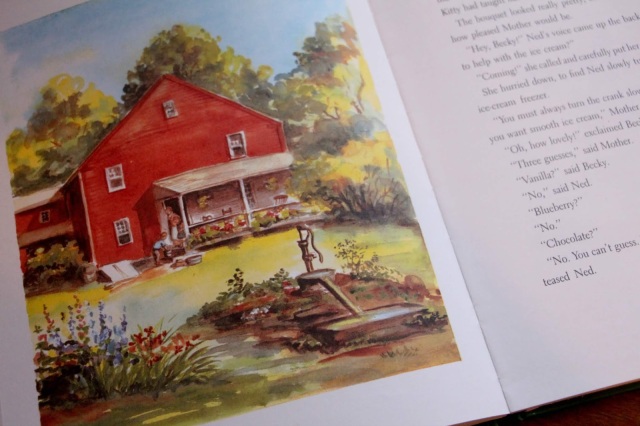 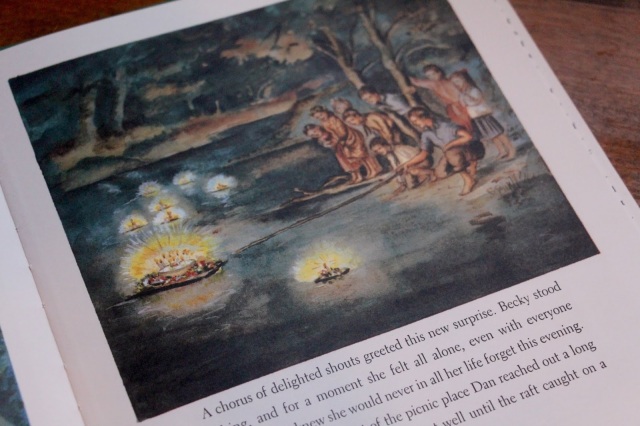 And, ah! There it is! Becky’s birthday cake! In this photo I’m pretty sure the cake is frosted with the white boiled frosting that Tasha also lists in her cookbook (all these recipes can be found in the Tasha Tudor cookbook). It looks beautiful in the illustration, and makes me want to give it another go!

Because, well, dear reader, sometimes its hit-or-miss in the kitchen! Just as it is in the garden, or at the painting table 🙂 if you’ve made the Becky’s Birthday Cake, I’d love to hear about it and how it turned out, and if you have any tips for me for next time! I feel like I’ve seen other’s make it and its come out fantastically.

Well, that is it for today. What shall I cook for next week? Time to start looking—
Take Joy!~
H

Welcome to Sleightholm Folk Art! I am Heather Sleightholm, a lover of history and homespun. On this site I will share what I’m making and what’s inspiring me.

So grab a cup of tea, gather your knitting, and settle in for a chat about creating and exploring a homespun life. Thank you for coming by to visit me! 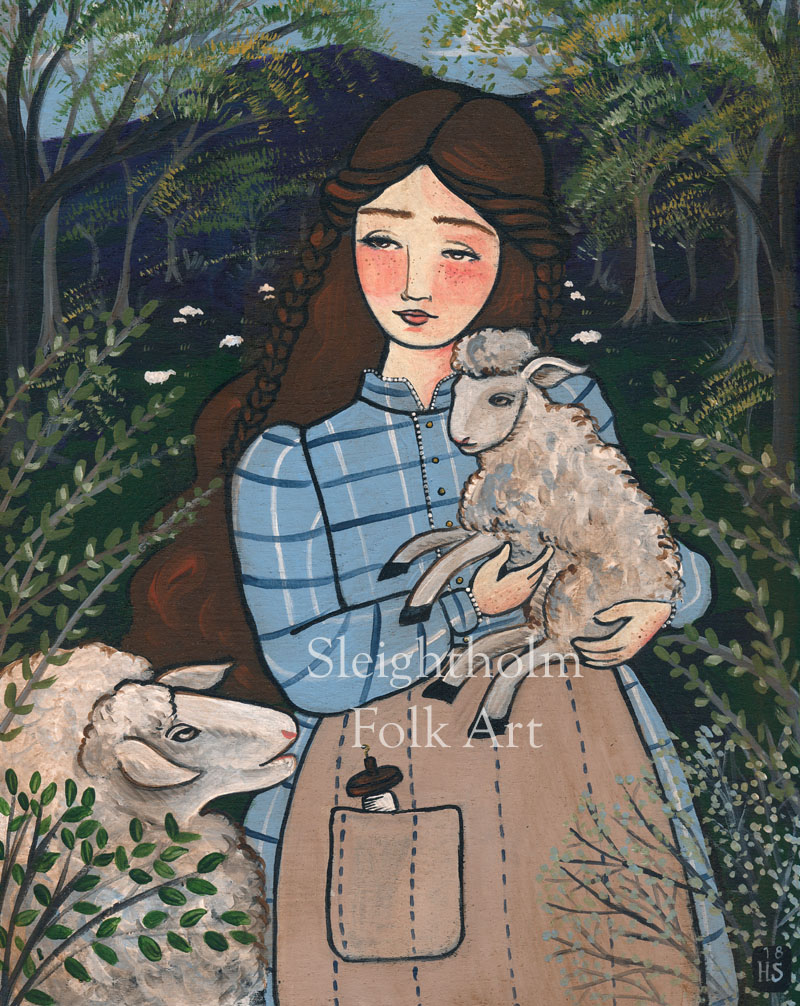